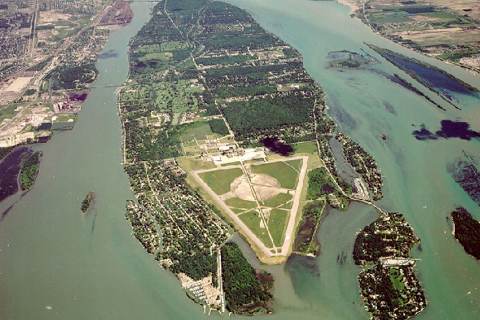 Grosse Ile is the largest island in the Detroit River and is the most populated island in the state of Michigan. It is on the American side of the river and is part of Wayne County. The island is approximately 9.6 square miles. The township consists of over a dozen islands - many of which are very small and uninhabited. To clarify this confusion, local residents refer to the island of Grosse Ile as the Big Island, Main Island, or simply The Island to distinguish it from the township as a whole. A large number of islands in the Detroit River are closely connected to Grosse Ile.

Grosse Ile is a Downriver community as part of Metro Detroit. The island is bordered on the west by the Trenton Channel and is connected to mainland Michigan by the Wayne County Bridge in the middle of the island and the Grosse Ile Toll Bridge on the northern end. The island itself is divided by two canals. The area north of this canal to the northern point of the island, known as Hennepin Point, is undeveloped and houses a historic lighthouse. The Grosse Ile Municipal Airport occupies the southernmost area of Grosse Ile. Grosse Ile is also the center of the Detroit River International Wildlife Refuge.

While the shoreline areas of Grosse Ile feature the majority of historically significant places and structures, approximately a dozen 1920s era homes in the Jewell Colony subdivision, located in the middle of the island, are listed on the Michigan Register of Historic Places. Jewell Colony was the first planned subdivision on the island. 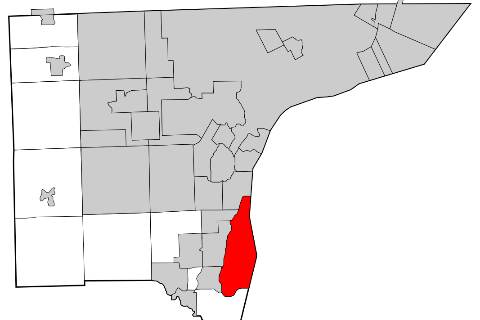 Grosse Ile's name comes from the French translation for Large Island. The island was first given to the early French explorers by the Potawatomi in 1776. Brothers William and Alexander Macomb were the first European owners of the island. The island was first surveyed in 1819 and was incorporated into Monguagon Township in 1829. The island remained sparsely populated as an independent community but did not receive autonomy until the formation of Grosse Ile Township on October 27, 1914. Island resident Cameron Waterman invented the outboard motor and successfully tested his invention in the ice-filled Detroit River off the shore of Grosse Ile during February 1905.