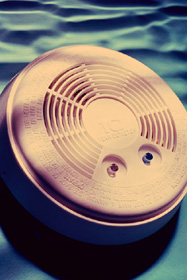 Battery - Powered
Battery-Powered smoke detectors operate on alkaline batteries. Unlike the bunny, they won't keep going forever. The battery should be checked weekly and replaced twice a year. A good time to do this is when you change your clock in the fall and spring.

Hard-Wired without Battery Back-up
This type of smoke detector operates on household current. As long as you have electricity, it will function, but if your house loses power, it will no longer function. If you have this type, you should also install battery - operated models for back-up.

Hard-Wired with battery back-up
These are hardwired models that have battery back-up so the detector will still function in case of power failure. If you have this type, the battery should be changed twice a year or when needed.

Hearing Impaired
There are smoke detectors available that have been designed for the hearing impaired. These smoke detectors have strobe lights that, when activated, emit an extremely bright white light that is able to awaken most people from their sleep.

**REMEMBER
Change Your Smoke Alarm Battery The Same Day That You Set Your Clocks Back! 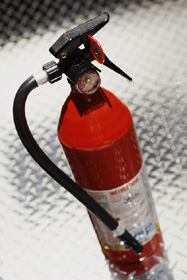 Type A: Ordinary combustibles. To be used on fires in paper, cloth, wood, rubber, and many plastics. This is a water type extinguisher.

Type B: Flammable Liquids. To be used on oils, gasoline, some paints, lacquers, grease in a frying pan or an oven, solvents, and other flammable liquids.

Type C: Electrical Equipment. To be used on fires in wiring, fuse boxes, and other energized electrical equipment.

Type D: Metals. To be used on combustible metals such as magnesium and sodium.

Buying and Maintaining a Fire Extinguisher

Remember - If there is a fire in your home, get everyone outside. DIAL 9-1-1.

Fight a small fire only. If the fire gets big, get out! Close doors to slow the fire spread and make sure you stay between the fire and exit.