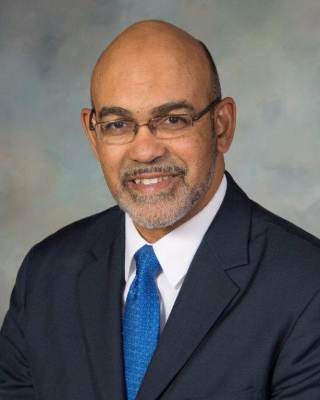 Eric R. Sabree has been Wayne County Treasurer since April, 2016. He works on behalf of 43 municipalities and is responsible for the receipt, custody, investment, and disbursement of all County funds with a special emphasis on the collection of delinquent property taxes.

Eric R. Sabree went to Miller Jr. High and Catholic Central High School in Detroit. After receiving his undergraduate degree from the Detroit College of Law at Michigan State University. He is licensed to practice law in the State of Michigan, the U. S. District Court, Eastern District of Michigan and the Supreme Court of the United States.

Eric Sabree is a past President of Kiwanis Club No. 1, Detroit, where he has been active for 30 years, serving the needs of children. He currently serves as Vice President of the Club's Foundation board. Eric R. Sabree is also a vice chair of the Southeast Michigan Council of Governments (SEMCOG). He is also a board member of Michigan CLASS, a cooperative investment fund serving government entities throughout the State of Michigan.

Eric R. Sabree is married to his wife Badriyyah and they have three adult children and four grandchildren.

"The Wayne County Treasurer's Office is responsible for the collection and disbursement of delinquent taxes and investment of all County funds, while providing outstanding customer service."

The Wayne County Treasurer's Office is committed to providing superior customer service and increasing returns on financial investments while embracing new technologies. We strive to reduce delinquencies and prevent foreclosures of owner-occupied homes for the stabilization of neighborhoods. Wayne County Treasurer's Office staff, along with community partners, will educate and empower taxpayers while treating everyone with dignity and respect.