Tim Killeen (D-Detroit) has been a Wayne County commissioner since 2007. He was born and raised on the lower east side of Detroit, the fifth of seven children. His father, Jim, was an investigator with the U.S. Immigration Service. After his retirement from the Justice Department, Jim served as Wayne County clerk for 18 years. Tim's mother, Georgia, a former teacher and FBI employee from St. Paul, Minnesota, raised Tim, his five sisters and one brother on Lakewood Avenue in Detroit.After graduating from Detroit's De La Salle High School, Tim went to work as manager of the Cass Corridor Food Cooperative in the 1980s. The Cooperative was a member-owned, not-for-profit food store that served the Cass Corridor and Wayne State neighborhoods as well as healthy eaters from all over the metro area through the 1990's. The co-op ran on the philosophy of "Food for People, Not for Profit." Through that experience, Killeen gained the skills of running a small business that, at the same time, provides a community service. From 1981 through 1986, he served on the board of directors of the Michigan Federation of Food Cooperatives, including one year as chairman. During that time, Tim sat on the bargaining team to negotiate the first labor contract in the organization's history. Tim is proud to have worked cooperatively with the union to reach a fair and equitable labor agreement.

Tim earned a bachelor of science degree in biology and a teaching certificate from Michigan State University in 1992, graduating with honors. He returned to the east side of Detroit and taught science at Denby High School for the next 14 years. Tim also purchased a home on Detroit's east side, where his garden is much admired by his neighbors.

In 1994 he joined the Sierra Club, a national grassroots organization dedicated to protecting the environment. In 1997, Tim became the Sierra Club's political chairman for Southeast Michigan. In that position, he combined his love of nature with his belief in the power of grassroots organizations to effect political change. Under his stewardship, the Sierra Club's Southeast Michigan political program has grown enormously and is now an effective political presence. In 2001, the Michigan Sierra Club Board of Directors named Tim the political chairman for the state of Michigan, a position he held until 2005.Tim has served in many capacities since joining the Wayne County Commission, including a member of the Committee on Audit since 2007. He is vice-chair of the Committee on Health and Human Services, after having servided as chair from 2010-20 andis also vice-chair of the Committee on Government Operations. He is also chair of the Special Committee on Behavioral Health. In 2012, the State of Michigan passed as law that separated the Detroit Wayne Integrated Health Network from county government and made it a free-standing authority. Tim was tasked by the chair of the commission in writing the enabling resolution that unsnarled this $700 million entity from county government. The Detroit Wayne Integrated Health Network has thrived in its independence and Tim has been a board member since its inception.Tim also sits, as the commission representative, on the Board of Authority Health. This governmental organization was created to deal with the medically un- and underinsured citizens of the county when it looked like Detroit Receiving Hospital would go bankrupt in the late 1990s.Civically, Tim sits on the Board of the Moross Greenway Project as well as the advisory board for the fledgling Detroit Community Nature Center located in Lakewood Park in the Jefferson-Chalmers neighborhood. He also serves on the Rosa Parks Memorial Task Force.

Tim's environmental advocacy has been fueled by his great passion for the out-of-doors. He has taken many trips through the woods and wilderness of Upper Michigan and has crisscrossed Isle Royale several times on foot and in a canoe. On these excursions, he enjoys his son's camp cooking and pursues an interest in nature photography. 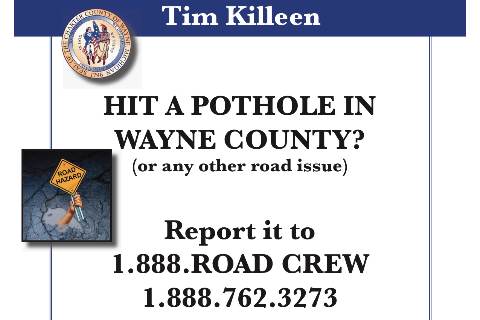 "CHAT WITH COMMISH KILLEEN:"
Commissioner Killeen will meet with 1st District constituents on Mondays at three sites in the district. No appointments are necessary. Click here for a flier with details. Meetings will not be held on holidays. Call (313) 224-0920 for more.

Wayne County health officials to give update on COVID-19 vaccines
Wayne County Health Department officials will provide a public update on vaccine distribution and other issues related to the county's COVID-19 response at the 1:30 p.m. Tuesday meeting of the Wayne County Commission Committee on Health & Human Services.

Wayne County steps up COVID-19 response to meet rising case numbers
Wayne County is increasing its response to the ongoing COVID-19 pandemic under a four-point strategy as case numbers continue to rise, county health officials said Tuesday in a meeting with members of the Committee on Health & Human Services. 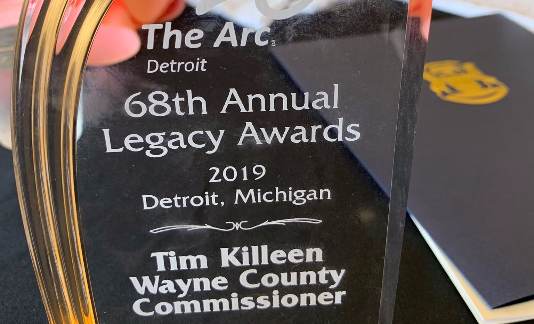 State grant, county match will pay for study on health of Rouge River Watershed
The Wayne County Commission voted unanimously July 16 to accept a grant from the state that will help the county monitor the health of the Rouge River and its branches.

Letter to District 1 residents: What is the Wayne County summer tax special assessment, and how I voted
Thank you for your inquiry regarding the 'WC Judgment' on your summer tax bill. Let me start with the simple and move to the more complex. This one-time levy is a Wayne County judgment levy.

Commissioner Killeen to serve as keynote speaker for conference to benefit deaf, blind residents
Wayne County Commissioner Tim Killeen, D-Detroit, will be the keynote speaker of the inaugural 'Community and Political Collaboration: Working to Improve the Quality of Life for the Deaf, Hard of Hearing and Deaf-Blind' conference, scheduled ...

Commissioner Killeen hosts free community health fair May 9
The event will run from 10 a.m. to 3 p.m. at St. Clare of Montefalco Catholic Church in Grosse Pointe Park. It is open to all.

District 1 Spring Newsletter
This year begins my fourth two-year term on the Commission. For about one-half of the readers of this newsletter, I have been representing you for six years. For the other half, this is the first year I am representing you.