The reduction of the amount of oxygen in a package by mechanically evacuating the oxygen, displacing the oxygen with another gas or combination of gases, or otherwise controlling the oxygen content in a package to a level below that normally found in the surounding atmosphere, which is 21 percent oxygen.

Vacuum Packaging
In which air is removed from a package of food and the package is hermetically sealed so that a vacuum remains
inside the package. 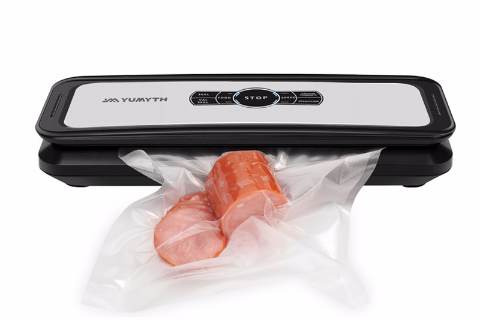 Cook Chill Packaging
In which cooked food is air expelled and are then sealed or crimped closed. Food is rapidly chilled and refrigerated at temperatures that inhibit the growth of psychotrophic pathogens. 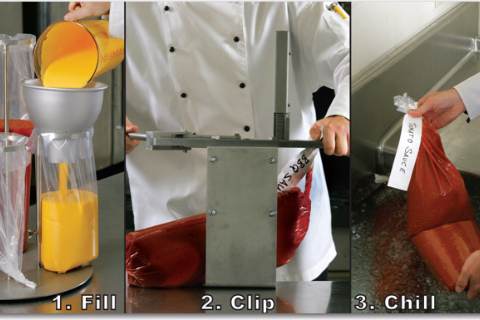 Sous Vide Packaging
In which raw or partially cooked food is placed in a hermetically sealed bag, cooked in the bag, rapidly chilled and refrigerated at temperatures that inhibit the growth of pshchotrophic pathogens. 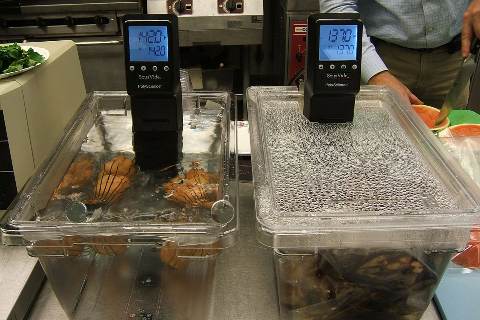 Modified Atmosphere Packaging (MAP)
In which the atmosphere of a package of food is modified so that it's composition is different from air but the atmosphere may change over time due to the permeability of the packaging material or the respirationof the food. Modified Atmopshere Packaging includes reduction in the proportion of oxygen, total replacement of oxygen, or an increase in the proportion of other gases such as carbon dioxide or nitrogen.

Controlled Atmosphere Packaging (CAP)
In which the atmosphere of a package of food is modified so that until the package is opened, its composition is different from air, and continuous control of that atmosphere is maintained, such as by using oxygen scavengers or a combination of total replacement of oxygen, non-respiring food and impermeable packaging material.

The control and growth of toxin formation of Clostridium botulinum and toxin formation of Listeria monocytogenes are the primary concern when using any of these methods. Reduced oxygen packaging requires a Hazard Analysis Critical Control Point (HACCP) Plan and a Variance per the science in the 2013 FDA Food Code Section 3-502.12. Food service establishments should not reduce oxygen package any food items without an approved HACCP Plan and a Variance approval notice from the Health Department.

Other Special Processes Requiring a Variance and HACCP Plan include: