Harper Woods is located between the City of Detroit and St. Clair Shores, and between Detroit and the Grosse Pointes. Harper Wood borders Macomb County on the 8 Mile Road side. It is located along I-94. Eastland Shopping Center is the community's shopping center. Harper Woods has no rail access and it has no major industries. Though a relatively new city, Harper Woods has played a role in the cultural history of Metro Detroit. For many years, the city was home to the East Side Drive-In, the first drive-in theater in Metro Detroit and one of the very first in the Midwest. The Hideout was a popular teen dance club in the mid-1960s. Many Detroit-area music acts - including Bob Seger, Mitch Ryder, Ted Nugent, and Glenn Frey performed at the club. The Hideout spawned a local record label, Hideout Records. Another venue for local bands in the 1960s and 1970s was Notre Dame High School. According to various accounts, "All the Motown artists used to come and lip-sync to their records." 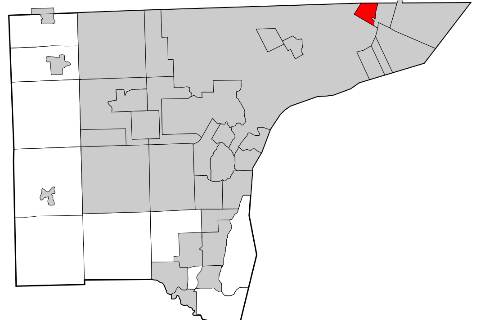 The first new settler in the part of the Township which is now Harper Woods was Casper Salter, who in 1859 took up a claim on a wagon track then called Pumpkin Hook Road (now Kelly Road) between Woodland and Woodcrest Avenues. Other families followed, and by 1875 there were eleven homes along Pumpkin Hook Road. The community grew slowly. By the mid-1930's there were still only about fifty homes in Gratiot Township. However, recovery from the Great Depression coincided with a push toward the suburbs, and from 1935 on growth was rapid. With the 1940's came the great influx of young families building homes. The fledgling City of Harper Woods was renamed from Gratiot Township in 1951.