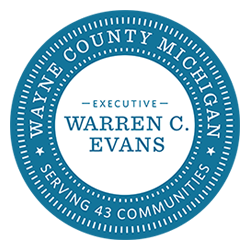 DETROIT - For the second straight year, Wayne County is projecting a general fund operating budget surplus of approximately $44 million for the fiscal year 2015-16 based on preliminary numbers from the Department of Management and Budget.

"Our Recovery Plan calls for creating surpluses through good fiscal management so that we can finish the jail and pay down our remaining unfunded liabilities, which are substantial," Wayne County Executive Warren C. Evans said. "The better the County sits financially when we finance the jail project, the less it'll cost us to borrow to complete it."

The announcement of these surplus estimates comes the same day that Moody's upgraded the County's rating on general obligation limited tax (GOLT) bonds from Ba2 to Ba1, the third such upgrade from Moody's for the County in less than two years. Final surplus numbers will be available when audits conclude in the spring, but reflect the continued progress made under the administration.

"That number may sound big, but we're still just getting the County to where it should have been in the first place. We're still playing catch up while charting our course forward," said Evans.

Following Evans' first year in office, the County posted an accumulated unassigned surplus of $35.7 million after the fiscal year 2014-15 audit. That number is expected to reach about $79 million combined, once the 2015-16 audit is complete. These surpluses, two years in a row, result from the fiscal discipline and the cooperation between the Evans administration and the Chair of the Wayne County Commission, Gary Woronchak, and other commissioners.

"The Commission and administration have done a good job enacting budgets that recognize the future needs of the County, and we're seeing the results," Woronchak said. "We'll never see eye-to-eye on everything, but there's been a good collaborative approach and shared commitment to the County's long-term viability."

Even with these back-to-back surpluses, however, the County will likely remain short of best practices for cash reserves in the General Fund as outlined by the Government Financial Officers Association.

"We need about 15 to 18 percent of annual expenditures in reserves in the General Fund at all times just to be stable over the long term. We're not there yet," said Chief Restructuring and Chief Financial Officer Tony Saunders. "This doesn't go as far as a rainy day fund, but it helps move us closer to a basic threshold for financial practices that is critical for any municipal government over the long term."

In addition to serving as a key prerequisite for long-term fiscal stability, such reserves impact items like bond ratings from agencies like Moody's, which can increase or reduce the cost of borrowing money. It also impacts the ability to handle another economic downturn, to manage other liquidity or challenges in the future.

The County had already allocated an additional $7.5 million to protect pensions beyond the Annual Required Contributions in the 2016-17 budget. If surplus projections hold true, the administration intends to add up to an additional $2.5 million to fund pensions this fiscal year, bringing that total to $10 million. The County's pension system still has $636.5 million in unfunded liabilities and is only funded at 54 %, up from 45%.

"I'm not going to even think about getting comfortable until our pensions are more than 80 percent funded, which is more in line with industry practices," Evans said. "We're walking a difficult balance right now, complicated by the Gratiot jail and several other challenges with facilities. We are operating a fiscally sound government that delivers the services people depend on, while taking the steps necessary to protect the pensions our employees worked so hard for over the years."

In addition to completing the unfinished Gratiot jail, which is expected to require the County to borrow additional money through bonds, the County is working to reduce its remaining unfunded liabilities and working to address facilities usage and conditions per the Recovery Plan. The County also faces severe underfunding with Other Post-Employment Benefits (OPEB), such as retiree health care.