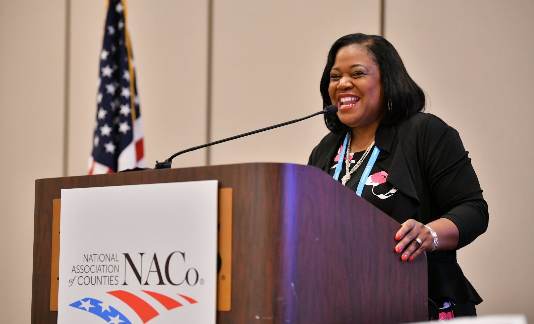 Commissioner Bell, D-Detroit, has been an active member of NACo for eight years, is Immediate Past President of the National Association of Black County Officials, Past President of Women of NACo and Secretary of NextGen NACo.

"I am truly honored to be selected vice chair of the Justice and Public Safety Committee," said Commissioner Bell, who represents the Commission's 7th District, covering part of Detroit's west side. "Our justice system is in need of some restructuring and I look forward to working closely with members to see that the necessary changes be made in the area of public safety as well.

"I pledge to keep all Wayne County residents informed on issues that affect us and have a say on policies spreading all across the country."

Bell was part of a contingent of more than 40 commissioners and county administrators from across Michigan attending the conference. The conference featured working sessions on such topics as how local governments can bolster services to the aging and using data to address family stability and public safety. Members also participated in voting to hone the American County platform, which guides NACo's work on Capitol Hill and with executive agencies.

The Michigan delegation also supported DeKalb County (Ga.) Commissioner Larry Johnson's successful bid for election as second vice president of the NACo Board. Wayne County is among the 51 Michigan counties who are voting members of the national organization.

"The scope of a county commissioner's responsibilities is never more apparent than when you see all of the issues presented at a NACo event," said Stephen W. Currie, executive director of the Michigan Association of Counties. "Our large contingent this year reflects the ongoing commitment of our members to learning from policy leaders and from their colleagues from across the nation."

Bell is in her ninth two-year term as a Wayne County commissioner, dating to 2003, and first term as chair of the Commission, as selected by her peers.

According to its 2017-18 annual report, 1,338 county officials serve on NACo committees. Founded in 1935, NACo assists counties "in pursuing excellence in public service to produce healthy, vibrant, safe and resilient counties. NACo promotes sound public policies, fosters county solutions and innovation, promotes intergovernmental and public-private collaboration and provides value-added services to save counties and taxpayers money," according to its mission statement.