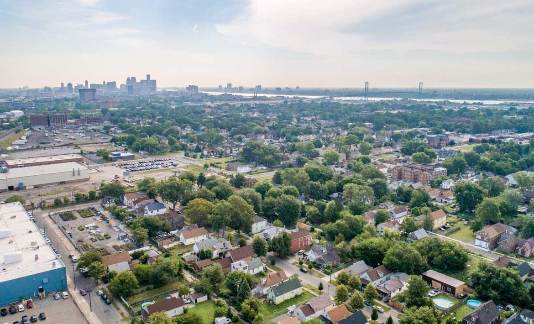 The Wayne County Treasurer's Office is expected to resume all tax foreclosures this year, and taxpayers are encouraged to get on a payment plan before March 14 if needed.

Tax foreclosure is the process by which a homeowner loses their property because they didn't pay their property taxes. Counties have the authority to foreclose under the state's General Property Tax Act.

"This year, we're foreclosing. We're not making any special category on what we're not going to do. Everything that's scheduled for foreclosure is on schedule for foreclosure. But our goal ... is to keep out the occupied properties" through financial assistance, Wayne County Treasurer Eric Sabree told the Free Press on Wednesday.

This marks a change from the past couple years. In 2020, the COVID-19 pandemic led to a moratorium on foreclosures. And last year, Sabree filed a request in Wayne County Circuit Court to not foreclose on any occupied homes and occupied commercial properties because of continuing pandemic-related economic hardships. That redemption period runs through March 31. Foreclosures on unoccupied properties and vacant land continued.

More:Detroiters can appeal their property values next month: What to know

Asked whether his office would file a similar request to the court this year, Sabree said he does not know yet, but the option still remains.

"If we have to go to court, we'll talk to the judge," he said. The annual auction is slated to take place later this year.

As of Thursday, 5,621 owner-occupied properties and 9,555 non-owner-occupied properties, such as rentals, were subject to foreclosure, according to the Wayne County Treasurer's Office. The majority are in Detroit. Sabree said he expects numbers to "drop drastically" because of payment plans and federal funding for which many taxpayers may qualify.

Across the county, there were more than 2,300 unoccupied residential properties and roughly 2,600 vacant lots that could be foreclosed. There were also more than 1,600 commercial properties - most of which are not occupied - in a similar situation.

Last year, Wayne County foreclosed on 2,877 unoccupied properties, including residential and commercial vacant structures and vacant land. In 2020, there were no tax foreclosures.

"This looks like a really tough year," said Ted Phillips, executive director of Detroit-based United Community Housing Coalition. Anecdotally, the amount people owe seems to be greater than in the past, he said.

Many low-income homeowners in Detroit have been able to avoid foreclosure by getting a poverty tax exemption and by bringing down delinquent taxes, but there are still those who haven't been able to do that, he said.

Your stories live here.
Fuel your hometown passion and plug into the stories that define it.
Create Account

In 2021, more than 15,000 applications came into the city of Detroit's Homeowners Property Exemption (HOPE) program, said Willie Donwell, administrator for the Detroit Board of Review. That income-based program exempts qualifying homeowners from having to pay their property taxes for the current year.

Massive outreach is necessary to reach the thousands of taxpayers who could face foreclosure, Phillips said.

"A lot of it I think is just people out of work, people without money, and now looking at having a huge bill to pay to catch up," Phillips said.

Sabree is encouraging people to get in contact with the Treasurer's Office and get on payment plans by March 14. The deadline to pay delinquent taxes and avoid foreclosure is March 31, based on state law, and the county plans to adhere to that timeline this year. In the past there were extensions.

"We don't want to foreclose on people if we can hear from them," he said. His office has gone door-to-door, he said, and sent out mailings with the deadline.

Housing advocates in late 2020 urged Sabree to not only extend a foreclosure moratorium the following year, but also stop foreclosing on any Detroit owner-occupied homes in 2022 and beyond.

Tax foreclosures are a contentious issue in Detroit. The number of tax foreclosures on occupied homes in Detroit has dropped in recent years, but there are still those who struggle to pay off delinquent tax debt.

Ways to get help

Income-eligible taxpayers can apply for a poverty tax exemption through their local assessor's office.

"If you have done that, and you're in process, then you won't get foreclosed while you're waiting for a decision from the city," Sabree said.

In Detroit, residents can now apply for the 2022 HOPE program, Donwell said. A change in the program last year also means an individual who is at risk of foreclosure and whose income is $34,000 or below can get a 10% reduction on their current year taxes, and then get into other foreclosure prevention programs, he said.

For more information, go to detroitmi.gov/HOPE.

People who qualify for a poverty exemption may also be eligible for the Wayne County Treasurer's Pay As You Stay program (PAYS), which reduces back tax debt. There are currently 17 participating Wayne County communities, including Detroit.

Detroiters enrolled in the HOPE program are now automatically being enrolled into PAYS and the Detroit Tax Relief Fund, which can help people get their back tax debt down to zero. This could help up to 3,000 Detroit families, according to a Wednesday news release.

The goal of the effort - announced last year and backed by a $15 million investment by the Gilbert Family Foundation - is to wipe away the property tax debt owed by about 20,000 homeowners.

The county also has other assistance programs, which can bring down interest rates, put people on payment plans or help some landlords and business owners hit hard by the financial blow of the pandemic.

For more information, go to bit.ly/WayneCountyPaymentPlans. Taxpayers can also email taxinfo@waynecounty.com and or call 313-224-5990.

An upcoming statewide program may also help those at risk of foreclosure in Wayne County, Sabree said.

Backed by federal pandemic relief dollars, it would provide funds for homeowners behind on mortgages, land contract payments, property taxes and utilities.

Nushrat Rahman covers issues related to economic mobility for the Detroit Free Press and Bridge Detroit as a corps member with Report for America, an initiative of The GroundTruth Project. Make a tax-deductible contribution to support her work at bit.ly/freepRFA.