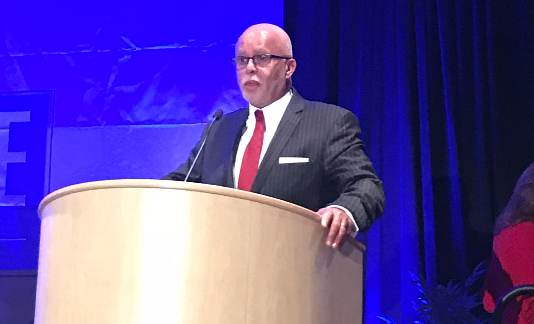 I was honored this morning to give welcoming remarks at the 19th Annual Rainbow PUSH Automotive Summit Leadership Breakfast.

First and foremost, I'd like to recognize the Rev. Jesse Jackson's leadership for people of color, which is exemplified by his founding of Rainbow PUSH which, in turn, created this very important event. The gathering of attendees including auto executives, entrepreneurs, suppliers, dealers, government officials, and auto manufacturers is a testament to the relevant reach and impact of the Auto Summit.

We owe Rev. Jackson a debt of gratitude for his service and his impact which obviously continues today through events like this.

It's safe to say that something big is happening in Detroit, and there is a lot of momentum.

You can see the cranes in the air around downtown and it seems there is a new restaurant opening up every day, and this is a good thing for Detroit and for Wayne County. But with all the progress in downtown and midtown, there is also a recognition that Detroit's comeback needs to be more inclusive. The auto industry which, as you know, has its roots in Detroit, is like all industries and can do better when it comes to diversity and inclusion. Progress has been made, but not enough, and the only way to get to where we need to be is to keep this issue on the front burner.

Â· 30% of all new vehicles are purchased by minorities

Â· Only 5% of American automotive dealerships are minority-owned

Thanks to the tireless efforts of organizations like Rainbow PUSH and the National Association of Minority Dealers, the struggle continues and progress has been made, but statistics such as these make it obvious that much more needs to be done.

At Wayne County we owe a lot to the automotive industry, as we are home to the headquarters of GM and Ford.

Our automotive companies of all sizes from small suppliers to the largest OEMs continue to be great partners and contribute so much to our community.

For an example of the transformative power of this industry we have to look no further than the Michigan Central Station a few months ago.

As we sit on the cusp of a new mobility era, there is no better time to put our efforts toward inclusion into overdrive. ... Because as we redefine mobility, perhaps we can also redefine the demographics of the workforce at the same time.