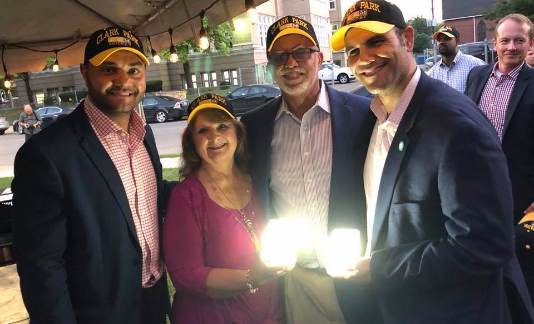 Wednesday evening was a very special occasion for Wayne County Executive Warren C. Evans when he attended the Clark Park Lighting Ceremony to join a crowd of more than 200 neighborhood residents as well as elected officials and others to celebrate the occasion of installing much-needed electric lights throughout the park. At approximately 8:45 p.m. as the daylight was just beginning to fade, the Wayne County Executive began a 5-4-3-2-1 countdown for the anticipated event, after which all 58 historic luminary light poles came on, accompanied by enthusiastic applause from the audience.

Work which began on June 4, 2018 to install the historic luminary light poles throughout the pathways has now been completed.

Wayne County, the primary project supporter, was the largest contributor to the project with $200,000. Greater Wayne Economic Development Corporation was the source of funding. Similar to how the County's work to help improve lighting along the Avenue of Fashion.

In 2004, Clark Park received $1 million from Wayne County to improve the Clark Park ice rink, which has become a centerpiece of the park. The money came from a countywide parks millage approved by voters.