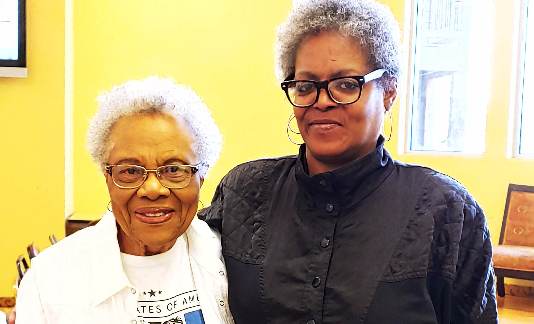 Dorcus Baxter calls herself an "Inkster girl," raised in the city where she now still lives and has been volunteering for Wayne County's Meals on Wheels program at the Chateau Cherry Hill Housing facility for the past 11 years.

She used to work at Hudson's Department Store before it closed in 1983.

"In 1978, they would always hire people for Christmas help. So I went downtown and the lady hired me. So that was November 1978."

After it closed in 1983, Ms. Baxter went to work at the Southland location. She worked there for 18 years and one month after doing five years at the downtown store.

Once she moved into Cherry Hill, she was asked if she wanted to receive Meals on Wheels.

Ms. Baxter likes it at Cherry Hill because "I don't have to drive anyplace. Saves on gas. And when I first moved over here several kids I grew up with were living here," she said with a laugh. "And some of them are still here! Some of the people I had known from church.

"Three months later I was asked if I could volunteer every Tuesday and Thursday [for Meals on Wheels at Cherry Hill]. I told her yes. So that went on for about 3 months. Then they sent another lady here. She asked could I work 5 days a week. I told her yes. That was March, 2008. I've been doing it ever since."

Except that she doesn't do the five days anymore after asking to have her hours cut back last November.

Right now Ms. Baxter said there is just her and another lady who volunteers with her. Sometimes another lady helps part time. When asked what were her responsibilities as a volunteer, she responded:

"Well, if the stove needs to be turned on, we do that. When the manager comes we clean the tables. We assist with preparing the meals. And we deliver. We deliver the meals to the homebound" inside the facility.

"At the time when I started we had about 14 homebound meals. Several on each floor. I did that for a long time."

"You know, you have to like people. Because some people..."

"I enjoy it. It's a nice program. You get the food you need for each day, and it's beneficial for you."