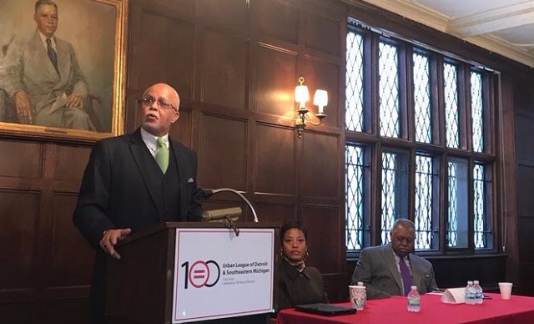 On Monday morning, Martin Luther King Day, Wayne County Executive Warren Evans served as keynote speaker for the Urban League of Southeastern Michigan's annual All People's Breakfast where he shared some thoughts on the necessity for all of us to work together for a stronger, more inclusive community. The event was held at the Urban League's Detroit office and focused on where society is today, 50 years after Dr. King's death as he spread his message of equality.

The Strength of Collaboration

"When the leadership of the country [President Donald Trump] can be so divisive and unprofessional, it bleeds into lots of other people and it's creating the dynamic that we all despise. But think about it; it gives us an opportunity to galvanize and say, this is not the country we want. This is not the country Dr. King wanted. This is not the legacy that we want to deal with. Hopefully this will bring us together in ways that we haven't been in years."

Struggle for Equality and Acceptance is Ongoing

"The fight to be accepted, the ongoing fight, is a fight that never stops. And people have to understand that. No nation in this world, no group of people, have ever ceded power in the world. It's not the natural order of things. People don't wake up in the morning and say, 'I'm going to treat you well'. You force them to treat you well. You accept nothing less. And you understand that it's an ongoing struggle throughout your life."

The Dangers of Complacency

"After the '60s and '70s, I think we fell into kind of a lull where there was a whole lot more individualism. If I can do well and I can do this then these things will happen."

The Importance of Mentorship

"You can't know what you don't know if you never had anybody to show you."