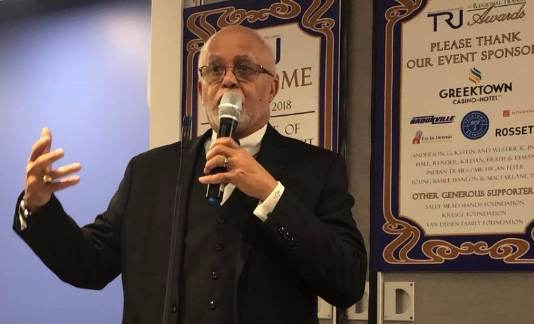 At Transportation Riders United's State of Transit annual meeting, Wayne County Executive Warren C. Evans talked about efforts to put a plan for regional transit on the 2018 ballot. You can read the full transcript on WDET's website or watch the video of his remarks on YouTube.

Here are some highlights:

The Urgency Of Regional Transit
It still needs to be said that we are a region that is woefully behind and has been behind forever with respect to how we approach transit. Over the decades there have been different reasons for that, some of them above the surface that we all like to talk about, some of them below the surface, and we're really ashamed to talk about. But those issues are there. And we as a region are not getting any closer to the reality of being what we can really be until we do want transit.

The Lesson From Amazon HQ2
Amazon, I think, was a serious case study in what this region doesn't have. And people can talk about all of the reasons, but clearly transit was a big part of it. And if we don't do anything about it, we're always going to come up short on those things. Amazon was not the last big employer that might look at this region going forward. But if we don't have transit we're going to be worse, and worse.

The 2018 Ballot
Those folks who want to push it to 2020, I think one of the things you got to ask is, "Do you really think it's more viable in 2020? Or, is that you don't really want to do it in the first place?" Out of sight, out of mind. I think it's an honest question that we have to look at.

On Keeping Pace With Changing Technology
The technology will change, but if we're not there with a transit plan, able to get into the design work that says, "This works better here," or "This will work better there," then we're just... it's a pipe dream. You've got to get in the game. You know [we're] really minor leagues, we need to get to the Majors. We may not be world champions overnight but you can't ever be a world champion if you're still in the minors.

Regional Cooperation
I don't want to have anybody have an impression that this is a late start out of the gate and somehow that's the problem - that's not the problem at all. The problem is we're now down to nuanced differences in the region that we have to sit in a room and figure out. Everybody's got politics in their area and I get that. What I don't get is, since the '70s we've been letting the politics stop us from moving forward and at some point you can't just wait for the political wind sometimes you've got to blow yourself. You've got to make some things move.