Fueled by regional collaboration, Aerotropolis is taking off 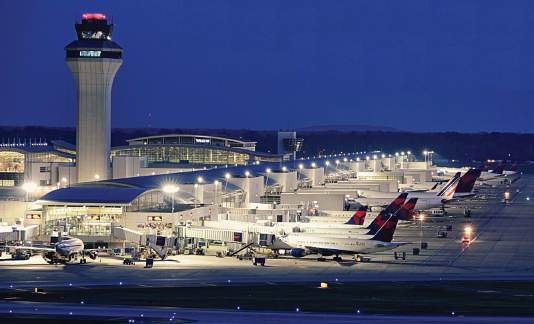 More investment and jobs in the pipeline following transformational 2017

Why you should care:

The need for a stronger and more unified Southeastern Michigan was much of what drove the conversation during Thursday's Detroit Region Aerotropolis Annual Meeting. The idea behind Aerotropolis, what makes it such a powerful concept, is the idea of regional cooperation for the sake of regional advancement. It is a concept that recognizes the inescapable fact that we are all in this together.

Aerotropolis is swiftly becoming one of the better selling points this region has to offer.

High on potential, but light on results for several years, 2017 represented a transformational year for Aerotropolis under new leadership.

"From a business development standpoint, the Aerotropolis team worked on a record-setting 47 projects this year, showcasing 104 sites to companies around the world," said Aerotropolis Executive Director Rob Luce. "In the last six months alone, three global leaders in their respective industries announced substantial investments in the region. Between June and November, Amazon, Penske, and Brose announced projects totaling $330 million in capital investment and the creation of over 2,300 jobs."

Luce also highlighted the fact that Aerotropolis has already attracted $68.8 million in new tax revenue and other performance measures outlined in the Aerotropolis 2017 annual report.

As a four-community, two-county public private economic development with 6,000 acres available for development, Aerotropolis is positioned to help businesses in the transportation, distribution, and logistics industry, as well as those in advanced manufacturing and next-generation mobility development.

A few short years ago, that just wasn't the case with Aetrotropolis.

"When I came in, I said that with economic development we have to look at it differently in Wayne County. It didn't seem to me it was making a lot of sense, and Aerotropolis was kind of on the table, and I think my first inclination was 'let's just get rid of it all and start anew," said Executive Evans. "And then the more I thought about the concept of Aerotropolis - not how it was performing - but the concept was exactly what we should have; team play among the communities out here to try to spur economic development, and for Wayne County to be a legitimate partner to make things happen. The other thing was build a relationship with the airport that is a solid relationship that at least has a vision where we're going down the same road."

Why is this important?

Just to give a peek at the growth that is expected to take place in Michigan over the next six years, Michigan Economic Development Corporation CEO Jeff Mason pointed out that between now and 2024, it is anticipated that Michigan's economic growth and expansion will require 800,000 more jobs that will average $60,000 per year in salary. That equates to $40 billion in new payroll.

Transit and the "Connect Southeast Michigan was never far from the conversation during a program featuring Executive Evans and Washtenaw County Commission Chair Andy LaBarre.

"The same communities saying they don't want transit are the communities with employers who can't get workers because workers can't get out there," said Evans.

LaBarre added, "It is ridiculous that we are still trying to find a solution to this [transit issue] 75 years later."

Wayne County Assistant Executive Khalil Rahal emphasized that what has been standing in the way of developing true regional transit in Southeastern Michigan has been a lack of leadership. Which is why Executive Evans has stepped up to take on the issue himself. Without regional transit, regional economic development is at a severe disadvantage.

Detroit Free Press Senior Business Columnist John Gallagher asked Rahal, LaBarre and Mason what they thought was the key to economic development in the region.

"Economic development is about how we get more money into our economy. For every dollar you spend on public transportation, you see $4 back in the economy. Transit takes priority. Less cars on the road means less accidents; less accidents means less death, less resources on police. It means lower auto insurance, it means lower health care insurance. ...Transit is such an important and key thing to developing our economy. And if we don't start taking this incredibly seriously, we are guaranteed to continue to lose out on the opportunities like Amazon. And that's ultimately what our job is supposed to do. Our job is to attract those kinds of businesses."