It Takes an Army: Meals on Wheels Volunteer of the Month: Deborah Colby 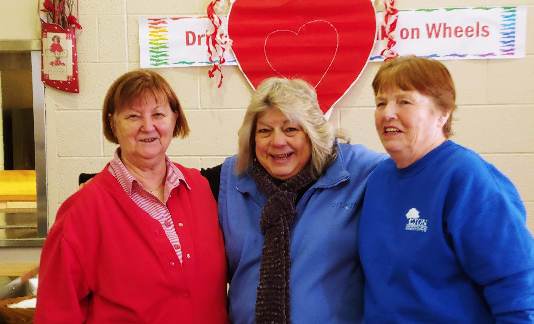 Series Note: The Senior Alliance contracts with Wayne County to deliver about 6,000 meals daily to eligible seniors age 60 and older via Meals on Wheels. More than 800 Wayne County Senior Services volunteers power the operation, many of whom personally deliver the meals each week. This monthly series will highlight just a few of those volunteers who make it happen.

When asked what it is about volunteering for Meals on Wheels that she likes so much, Deborah Colby responded:

"I'm an Earth angel. Didn't you know that? I'm a giver. I'm an empath. I was put on Earth to make somebody smile."

Judy Gahan, site manager for Wayne County's Eton Community Center site in Dearborn Heights where Colby has volunteered for the past four years, agrees.. During her relatively brief time as a volunteer Colby, has demonstrated an unusual capacity for caring and compassion for homebound seniors. "She makes us smile, and she makes sure everybody's happy," said Gahan, who nominated Colby to be a Wayne County Meals On Wheels Volunteer of the Month. "She has compassion for the people out there. [For example she will] give little gifts to the people out there, and she has the joke of the day."

Gahan has worked for Senior Services for more than 20 years.

During her relatively brief time as a volunteer, Colby, has demonstrated a capacity for caring and compassion for homebound seniors that has not gone unnoticed..

But the one example of Colby's compassion that stands out to Gahan - and to her colleagues - is how she responded to a situation she encountered during her rounds delivering meals with a particular homebound senior named Jim who had fallen in front of his door and could not get up.

"He was blocking the door. Deb went around back to get in and she called 911, then called me. We sent another driver to deliver the rest of the meals and Deb stayed until EMS arrived. Per Jim's request, she let his neighbor know to take care of Homer, Jim's dog. Every week after that she would take treats to Homer until Jim finally got home."

"I know the routine; If the drapes are open and the door's ajar, that means everything's OK. If not then there's a red flag. ...The majority of them don't have anyone except that bright shiny face on Monday mornings to brighten their day."

Making better days for those that need them is what guides Colby, who described her guiding principle as follows:

"I hope I brightened your day today by making you smile and making you shrug off any problems you had and bring the sunshine to you. It's important. Without that human communication you've got androids sitting around looking at cellphones and not talking to one another."