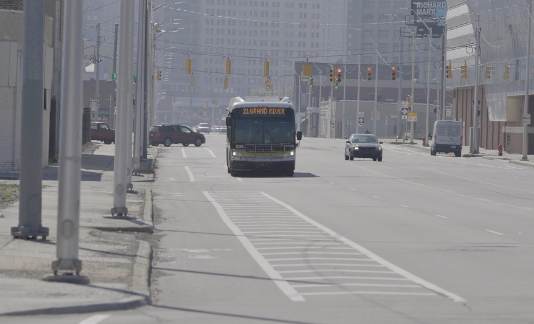 On my way to the island yesterday, from the ferry, I got on like all of you did and started out across the water. And part way over, I had a thought that said, what if we had an opt-out community out here on the water? I, for one, can't walk on water. I think most of you can't either. I do know a couple of people that believe that they can, but we'll just leave that out of the discussion right now.

I'd like to have a candid discussion with you, if I could, about transit. We hear an awful lot about it now, and it's been a 40 year problem in this region. We've spent at least 40-years talking about it, fussing about it, fighting about it, sometimes, cussing about it. And we still don't have transit. 40 years ago, that argument started.

Eighty years ago, we had the issue of the Huron-Clinton Metro Parks' formation. And the whole idea of should we spend Detroit dollars for issues that would be outside of the city of Detroit? I mean, does this make sense? That Detroit would subsidize the regional metro parks?

We got it right that time. We decided yeah, it makes sense for the region. And so we voted for a regional Huron-Clinton Metro Parks for green space for recreation for the region. Makes sense, I think now we all look back on it and say, "That was a wonderful thing that we did." The only thing is, in that case, it was Detroit doing the arguing about subsidizing.

You hear about subsidizing all the time, now the argument is transit will subsidize Detroit. The truth of the matter is, transit doesn't subsidize Detroit. What transit does, is subsidize routes. And routes are where people go, and where people go, are where the routes are. And that's where the dollars should be spent. So it's kind of a haterade/Gatorade argument. If people are coming to Detroit, they're coming to Detroit. And transit takes them there. It's a data driven process. It's a process that, it flows where people go.

There's a myth with respect to transit that I'm hearing an awful lot now. And that, you know, I heard it the other day. I think my friend in Oakland County mentioned the fact that we have stand alone economies. That Oakland is a standalone economy. That it doesn't need Detroit to survive. Which is kind of saying I'm not really a part of the region, really. But we are, and it's not true. There are no stand alone economies.

As an example, in the city of Novi, 83% of the people who work in Novi live outside the Novi city limits. And of the people who live in Novi who work outside of Novi, guess where the number one destination for them to work is. You can probably guess it. Detroit.

So we are intertwined, we're joined at the hip. The economy doesn't stop at 8 Mile, and it doesn't start at 8 Mile. That's a myth we've gotten into for a long period of time. But it's just that, it's a myth. We go across 8 Mile all of the time. Money flows across; people flow across, back and forth.

Amazon told us we're behind the curve in transit. Others have told us that, but Amazon told us that very clearly. FOXCON told us, "No Detroit." The US Army told us "No Detroit." They didn't always say transit, but they say things like livability. They would say things like ability to move talent. And really, in essence, what is that? That's transit.

It's all interrelated with transit. So we're behind the curve, and we need to know it. Another myth that I think we hear all of the time, and I think we hear it more and more now because as the clamor for transit grows from neighborhoods, from transit organizations, from employers, from CEOs, as the sound starts beating, now the more obtuse excuses and myths come up.

The reality is it's got to be both. We pay less in this region than anywhere in surrounding regions for both transit and for roads and infrastructure. And most of us know, you pay for what you get, you get what you pay for.

Understand too, when you hear these strange discussions now about SMART versus RTA, understand that they're talking about a renewal millage for SMART. Renewal millage means we get to keep the same inadequate system that we currently have.

I'm totally in support of the renewal millage for SMART. Why not? Nobody wants to go backwards. It's important that we support SMART. But we got to support RTA too. And if RTA has the ability to do what it needs to do, it too will support SMART. SMART's a great organization. But SMART has opt-outs. And when you have a region, you can't have a region with donut holes in it. You got to have a region, or you don't. We need both. We need roads and transit. We need RTA. We need SMART.

If I never got on a bus in my life, I would support transit. And I would support transit because it is good for our region. Not everything has to be personally good for me. It's good for the region. If it helps to connect people with opportunities. If it helps mobility in this region, it helps me. And it will be a residual benefit to me and everybody in this room, whether we use it or not. That's when you think regionally. If we can't think regionally, we've got a problem.

Why we're having this problem right now is pure politics. And it's not just the issue of some being for and some being against transit. It's really about whether or not some of my colleagues will allow transit to even get on the ballot. You can be against it, but let voters vote for it.

The DIA, the Zoo, Cobo Hall, none of those have opt-outs. We support them all because they're good for the region. They bring benefit to all of us. Why not transit? I'd love to opt out of the I-75 expansion. But I can't. But more importantly, I shouldn't be able to either. Not everything has to be for me.

When we say Detroit or our region, versus everybody, that's a sign of pride that says we're trying to do something as a region, and we're proud of the rebirth of our city. What we act like on transit is Detroit or the region versus ourselves. We fight, we argue. That's no good for progress at all. What's good for Detroit is not bad for the suburbs.

I took a bus ride. Two and a half hours, two mile walk, to try to get to a location in Novi. I learned something from that walk. First of all, the buses are slow as heck, and second of all, I'm not the walker I used to be. And the roads that I walked were not safe for people to walk.

We have to, in this region, understand that we've got to do better with transit. We've got to allow it at least to get on the ballot. There are influence makers here in the house, many of you are. Let's get this thing moving, it's been forty years. We don't have a lot of additional time. People are telling us we're not the region we could be, because we don't have transit.

This is a critical issue. Thank you for your time.