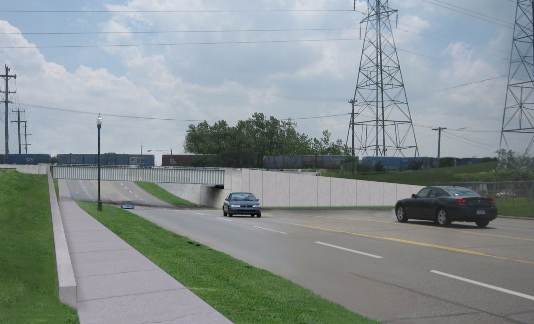 "This is another long-standing problem that's held back Wayne County and I'm pleased we were able to bring all levels of government together to finally broker a solution and help increase access to the Downriver economic corridor," said Evans. "This is a key artery to one of our busiest commercial and industrial corridors and the delays have created headaches for residents, businesses and visitors for years."

The projects will create a grade separation at Allen Road elevating the train crossing above the road, which will be lowered by more than 20 feet to allow motorists to pass freely under the bridge. The projects are expected to take up to three years to complete with an estimated combined cost of up to $39 million, which will include road reconstruction work at both Allen and Van Horn roads as well as construction of a pump house and relocation of utility, water and sewer lines.

Funded with $35 million to $39 million in federal, state and local revenue, the proposed projects will address a decades-long problem that often caused delays for the entire Downriver region. The agreement today still requires approvals from the Wayne County Commission and Woodhaven City Council. The County also needs to bid and award the work over the next 9 months.

"There are a number of serious train issues Downriver where railroads block intersections for significant amounts of time," said Dingell. "Recognizing this, John Dingell got federal money 15 years ago so communities could begin to address the problem. Today's announcement moving forward with the Allen Road crossing in Woodhaven is only a start in addressing the devastating delays for residents trying to get to the only level II trauma center Downriver, for major automotive companies trying to get just-in-time deliveries and residents trying to get to and from work or school. This is just the beginning and we have much work ahead of us to address the other problematic crossings in the area."

On average, more than 30,000 vehicles, including 2,140 commercial trucks traverse the Allen Road crossing daily typically competing with 9 trains using the CN Flat Rock Yard. While the average stoppage caused by the trains is just over 9 minutes, that amounts to more than one hour in total per day, and it's not uncommon for some stoppages to last 45 minutes or more. In one instance in 2014, due to a mechanical failure, trains blocked the crossing for over six hours.

"The project will not only benefit the City of Woodhaven but will benefit the entire region," said Woodhaven Mayor Patricia Odette. "Residents and businesses have been negatively impacted for years and the delays have brought our city and much of the region to a standstill several times a day. It causes issues for our schools, emergency personnel, and has negatively affected the quality of all of our lives. Opening up that main corridor will positively impact the entire region."

"By bringing people together and reaching a deal to finally build this bridge, we're delivering results for Downriver residents and finding a solution to this problem after decades of attempts," said Camilleri. "With this grade separation, our community will be safer and have more opportunities for economic development. I'm excited that the $12 million we secured in the state budget could be a catalyst to finally get this project started. This project is going to provide relief to the residents and businesses who've been hurt by the crippling delays."

The City and County for several years have unsuccessfully applied for Transportation Investment Generating Economic Recovery (TIGER) grants but now have a path forward through a combination of funding from the state of Michigan, Wayne County and City of Woodhaven.

"We are so proud that we were able to secure funding for this grade separation project in the state budget. It would not have happened without the support of Governor Gretchen Whitmer and our colleagues in the legislature," said Chang, who worked with Rep. Camilleri to help secure funding for the project in this year's state budget. "Today's announcement is a victory for the residents and local leaders who have urged action on this public safety and quality of life issue. When local, county, state and federal officials work together, we can get things done and solve big problems."

"I am glad that all of the government entities have been able to come together to work out an agreement in order to solve the situation," said Odette. "To the Governor, the Wayne County Executive, and to our State Representative Darrin Camilleri and Senator Stephanie Chang, my deepest gratitude. If it were not for the late Congressman John Dingell, who began this project it would have never even gotten off the ground, and for that, the City of Woodhaven will remain eternally grateful."