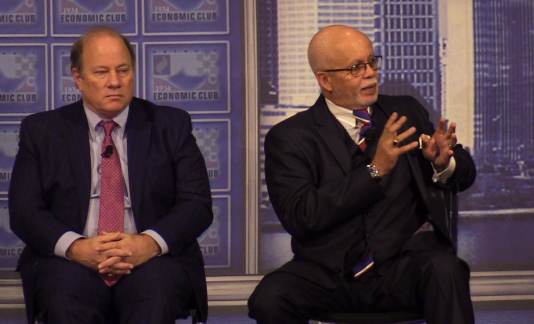 At the Big Four Luncheon held by the Detroit Economic Club, Wayne County Executive Warren C. Evans emphasized his continuing belief that regional cooperation in developing a much improved regional transit system that better serves the residents of Southeastern Michigan is critically important to forward progress. Without an improved transportation system, Evans said that the region will continue to lose out on large investment opportunities such as the failed bid for Amazon HQ2.

Mass transit is equally important in appealing to and retaining young residents, many of whom have little or no interest in owning their own cars, he said.

"We are the worst region in this country for transit," said Evans.

"To sit here and wait for the ultimate technology, I guess we'll sit here and wait until we all fly like the Jetsons. But nobody has that amount of time. Buses are what we use now. Light rail, the future, wherever we need to go, we need to be more about developing the plan and getting the tax base that allows us to do the research to figure out where we need to go. And I'll tell you there's an awful lot of suburban communities where the older folks are happy to stay there, but the kids want to come downtown. That's just the reality. And they don't want to come downtown, as Mayor Duggan says, and drive. They want to be on their devices."

Held during the 2018 North American International Auto Show, Evans and Duggan were joined on stage at Cobo Hall's Grand Ballroom Tuesday afternoon by Oakland County CEO L. Brooks Patterson and Macomb County CEO Mark Hackel. The forum focused on regional topics of interest, but the single most anticipated topic of discussion was the status of mass transit.

More from the Wayne County Executive on transit

"(The biggest regional issues are) regional transit, with infrastructure a close second. Not having cohesive transit holds the county and region back in so many ways, both economically and in terms of quality of life."

"I don't think we do the whole region justice by not getting a more comprehensive plan."

Other topics addressed by the Executive:

"Our roads and bridges are in bad shape. We do not have nearly enough money."

"Clearly, that is our number one issue in Wayne County. There are no funding resources to fix our infrastructure."

"This remains the big albatross for the county now that we've restored fiscal stability," said Evans. "Once we have an agreement, there is much work to get Wayne County government where it needs to be. We need to invest in talent, facilities and infrastructure, which was neglected during the fiscal crisis and leading up to when I took office."

Future of the region

"This region is growing in many different ways, and there will be other opportunities for companies to want to come here because of what we have to offer."

"The lack of civility can become contagious, and that's not good for America."