Regional Transit, the Michigan Central Station, And Our Corridor Of The Future 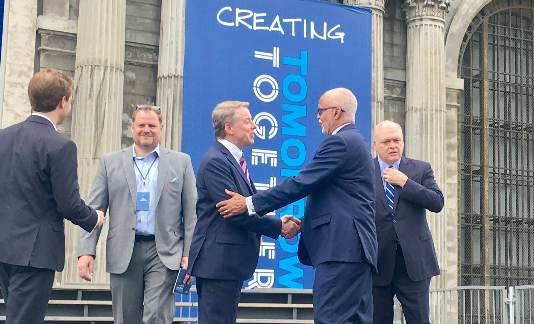 There was a special energy in Detroit last week when Ford announced their purchase of the Michigan Central Station. It's obvious why Detroiters are excited to see plans to transform the vacant train station, long a symbol of the city's despair, into a beacon of progress and home to hundreds of Ford employees working mostly on advanced mobility. But Ford's MCS venture was greeted with cheers, not just from Detroit proper, but from leaders across the region.

One of the loudest cheerleaders was Dearborn Mayor Jack O'Reilly. This might be surprising because Ford's decision to locate workers in Detroit means they won't be located in Dearborn where the automaker is headquartered. But Mayor O'Reilly sees the bigger picture: "Everybody wins," he told The Detroit News about the train station deal. "This is regional. We sink or swim based on what we do as a broad community."

Mayor O'Reilly recognizes that Ford's plans for the Michigan Central Station will not diminish the automaker's investment in Dearborn. Instead it will bolster the entire Michigan Avenue corridor from downtown Detroit to Dearborn to Detroit Metro Airport and the surrounding Aerotropolis district (which has delivered major job-creating projects like Amazon, MOPAR, Penske, and Brose) to Ypsilanti and Ann Arbor. Wayne County benefits from Ypsilanti's American Center for Mobility and the great universities, Michigan and Eastern, in Washtenaw County. Ford clearly sees all these pieces aligning to make Michigan Avenue a destination for the engineers and entrepreneurs who will remake our mobility economy.

Some of that activity will happen in Wayne County and some of it in Washtenaw. Some of it will also take place in Oakland and Macomb Counties. As Wayne County Executive, I'm thrilled for all of these opportunities for all of our region's communities. All the pieces matter and they all support each other. This rising tide has the potential to lift all our boats. But we need to work together.

Every economic development project we're working on in Wayne County, like the recently closed sale of Eloise in Westland or the efforts to redevelop the McLouth Steel facility downrivier, wouldn't be possible without an overall strong regional economy. We can't look at our problems through the old city vs. suburb or Wayne County vs. Oakland and Macomb County anymore.

Decades ago, cities and counties could think of themselves as standalone entities. In 2018 and beyond, just as the automotive industry thrives because of its global supply chain and just-in-time manufacturing, our economic self-interests are best served when we are part of a larger economic ecosystem. We cannot afford to silo ourselves from our neighbors.

This is why regional transportation matters so much. The Connect Southeast Michigan transit plan will provide bus service every 15 minutes along Michigan Avenue helping connect workers and students to this corridor's emerging assets.

But Michigan Avenue isn't enough. That's why Connect Southeast Michigan also envisions the same service level along Grand River and Woodward into Oakland County and Mound and Gratiot into Macomb. That's why it also provides ten other routes across the region with buses running every 15 minutes and routes better connecting all four counties to Detroit Metro Airport.

All this makes it easier for workers to get to job sites. That makes Southeast Michigan more attractive to employers in mobility, logistics, and any other industry that needs to tap into our regional workforce.

Our commitment to connectivity, cooperation, and mobility will drive Southeast Michigan's future. It's long past time to let go 1970s mindset about regional collaboration, whether we're talking about transit or other issues, if we want to maximize the benefits brought by this changing economy for southeast Michigan.