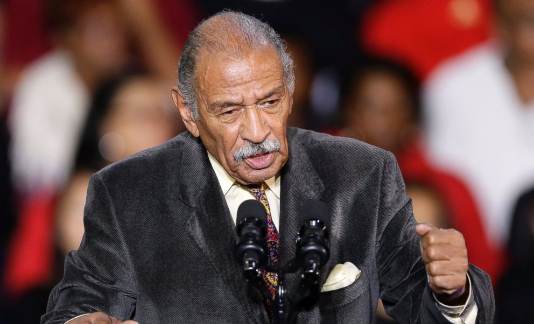 HONORING THE MEMORY OF

WHEREAS, John Conyers Jr., as the sixth-longest serving member of Congress in U.S. history and the longest-serving African American member of Congress, representing his community from 1965 until 2017, was the 44th Dean of the U.S. House of Representatives; and

WHEREAS, John Conyers Jr. began his work in politics in 1958 as an aide to Congressman John Dingell, whom he served until 1961; and

WHEREAS, John Conyers Jr. made history when he was elected to the House of Representatives in 1964 on a platform of jobs, justice and peace; and

WHEREAS, John Conyers Jr. co-founded the Congressional Black Caucus in 1969 only four years after becoming a member of the House and was recognized as the Dean of that original group of thirteen. He was instrumental in transforming that body into the powerful group of highly influential elected officials that it has become one half-century later; and

WHEREAS, John Conyers Jr. sponsored some of the most socially significant legislation of our time including the Martin Luther King Holiday Act, the Alcohol Warning Label Act, the National Voter Registration Act and the Hate Crime Statistics Act.

WHEREAS, John Conyers Jr., a lover of the music of John Coltrane, Miles Davis and Charlie Parker, sponsored a successful Congressional resolution designating jazz as a "national American treasure" in 1987; and

THEREFORE, BE IT HEREBY PROCLAIMED that I, Warren C. Evans, on behalf of the citizens of Wayne County, offer my deepest sympathy to the family, friends and colleagues of John Conyers Jr., who leaves behind an unparalleled legacy of service and accomplishment that has left his hometown of Detroit a better place than when he found it and has earned him a place in our hearts representing the best of what we hope to be.