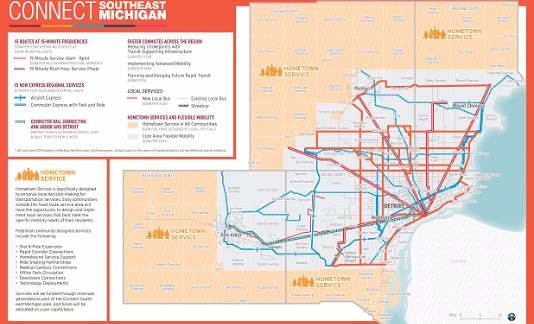 DETROIT - Today, Wayne County Executive Warren C. Evans asked the Regional Transit Authority of Southeast Michigan for feedback on a new draft transit plan and to consider placing it on the November ballot for voter approval.

"Representatives from four Counties and the city of Detroit have developed this plan over thousands of hours since April," Evans said. "We've been debating transit for decades and I think voters deserve an opportunity to see this proposed solution. If they vote it down, they vote it down, but I can't see the rationale of why wouldn't let them consider it."

The plan, entitled "Connect Southeast Michigan," calls for a 1.5 mill property tax levy on Wayne, Washtenaw, Oakland, and Macomb Counties. The millage is projected to raise $5.4 billion over 20 years to fund expanded regional transit service and plan forward flexible transit innovations as technology changes the transportation and mobility industries. The average house in the RTA region is worth $157,504, meaning it would cost $118 a year, which is less than $10 per month.

It would also leverage an additional $1.3 billion in farebox, state and federal revenues for Southeast Michigan. Highlights of the plan include:

Â· Flexible "Hometown Service" Program: Focuses on communities not serviced by the new plan's transit routes, bringing value to areas of region not addressed in 2016 plan.

"This plan is designed to serve riders where they are and where they need to go on a daily basis," Evans said. "It will expand economic opportunities for countless local residents who struggle to get to work, school, or even the doctor's office. It will also take cars off the road, which will ease congestion, reduce emissions and increase productivity. It brings value to all four counties and is flexible enough to grow with mobility technology so we can adapt it moving forward."

In addition to expanding service and investing in infrastructure, this plan will create full cooperation between SMART, DDOT, and other transit services to create a single fare structure and reduce overhead and ensure more of every transit dollar goes directly into service for riders. The plan, if ultimately approved by voters, is projected to support 67,000 jobs, provide $6.6 billion in additional Gross Regional Product, and generate $4.5 billion growth in personal income.

By statute, 85% of tax revenue raised under this plan will be invested in the county it was collected from. With federal and state contributions, investments in each county will exceed 105% of their tax contributions.

"There is no national debate about transit. We are letting some of our federal tax dollars go to pave a road somewhere else or fund transit somewhere else in the country because we don't have a regional plan. It just doesn't make sense," said Evans. "We need this plan just to get in line for the federal and state tax dollars needed for large transit projects that can greatly enhance mobility throughout the region."

Executive Evans addressed transit in his 2018 State of the County Address on March 13 at the Detroit Institute of Arts' Detroit Film Theatre. Full text of that speech is available at: https://www.waynecounty.com/elected/executive/sotc.aspx.