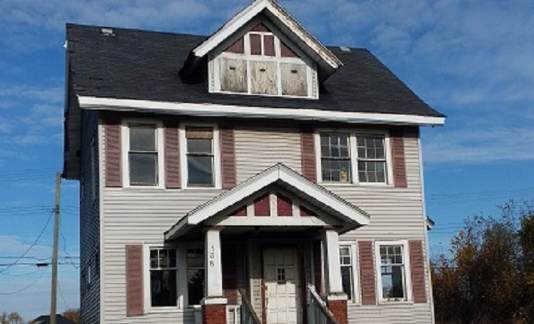 Land Bank tackles blight, redevelopment one block at a time

A large part of keeping any community healthy is making sure the neighborhoods aren't eroded by blight. In Hamtramck, a city that measures just 2.0 square miles, the Wayne County Land Bank (WCLB) took an important step in that direction this month by helping to rehabilitate 10 formerly distressed properties that are now listed on the market.

"It is my hope that the newly revitalized properties will serve as a stabilizing influence to the neighborhoods, helping to increase property tax revenues and bring new homeowners to the city," said Daniel Rosenbaum, Executive Director of the Wayne County Land Bank. "A year ago these parcels, all of which were residential and single family structures, were largely overgrown and exhibited varying degrees of blight."

By November 12 of this year all 10 properties were rehabilitated, thanks in large part to Enterprising Real Estate, which spent a total of $519,905 on the properties over the past year.The project took just over a year, beginning on May 4, 2017 when the Land Bank executed an Intergovernmental Agreement (IGA) between the Land Bank and the City of Hamtramck. The agreement stipulated that Wayne County would assume all obligations for the properties, including paying $44,000 to the Wayne County Treasurer, the amount equal to acquiring those properties in 2016 for delinquent taxes.

"As part of the agreement, we agreed to maintain the properties, clear title, market the properties for rehabilitation, and then sell them to a responsible third party with enforceable rehabilitation terms. which would help us prevent speculators from sitting on the property and thereby perpetuating the cycle of blight.," said Rosenbaum.

The Land Bank marketed the properties through a bid process in 2017, resulting in the selection of Enterprising Real Estate to partner with the Land Bank to rehabilitate them. Through the purchase agreement, there were specific requirements enforceable by the Land Bank, including:

The effort in Hamtramck is part of a broader successful push by the WCLB to tackle redevelopment and blight one block at a time. The WCLB owns and manages over 1,300 properties in Wayne County and has made significant progress over the last two years toward that goal. The Compliance Program, rolled out in 2016, is so far responsible for the rehabilitation of more than 150 homes, not including the additional 300 properties that are moving through the monitoring phase.

In addition to its Compliance Program, the WCLB also spearheads several other initiatives to rehabilitate depressed properties including the Action Before Auction Program, Side Lot Program, Nuisance Abatement Program and the Quiet Title Program.

For more information about the Wayne County Land Bank, please visit www.WayneCountyLandBank.com or contact the Land Bank at (313) 967-3669.