McLouth Steel site steps out of the past toward a brighter, more productive future 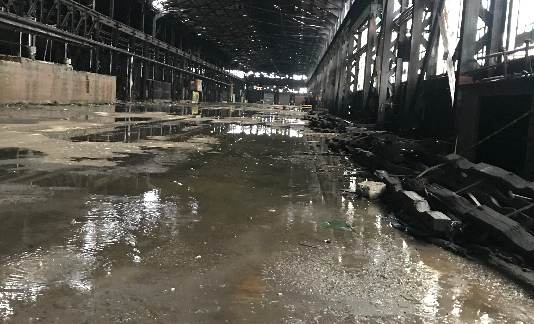 McLouth Steel Plant, once home to the ninth largest steel manufacturer in the country, took a step into the future Thursday afternoon. A host of local elected officials and dignitaries gathered at the Trenton site on West Jefferson Avenue to formally celebrate the long-awaited next chapter of the mammoth site, which is now on its way to becoming a reality.Thanks to an unprecedented level of cooperation between the Michigan Department of Environmental Quality, Wayne County - including the efforts of both Wayne County Executive Warren C. Evans and Wayne County Treasurer Eric Sabree and past Treasurer Raymond J. Wojtowicz and the County Commission - the City of Trenton, led by Mayor Kyle Stack, and Crown Enterprises, led by Mathew Moroun, a massive structure that once employed more than 5,000 people during its heyday in the mid-20th century, and was a manufacturing anchor for the region, will be torn down over the next two years to make way for new development and a new era.

On Thursday, Crown pulled down the large Detroit Steel Company sign, symbolizing what's to come over the next two years, something many people thought may never occur.

"Please pinch me, I can't believe this is happening," said Mayor Stack.

Congresswoman Debbie Dingell, who cited her roots in Trenton, was also on hand for the occasion.

"This is home to me," said Dingell, who reminded the crowd that she and her husband, retired Congressman John Dingell, used to live in Trenton. And that they have family who still live in the city.

"I can remember McLouth in the good times and the not so good times," but this is a time for moving forward, she said.

Founded in 1934, McLouth fell on hard times in recent years following a bankruptcy filing in September of 1995 and eventually became a massive eyesore for the residents of Trenton.After delivering his remarks to celebrate the historic occasion, Wayne County Executive Evans handed over the deed of what is now the former McLouth Steel Corporation from the Wayne County Land Bank to Mathew Moroun. His company, Crown Enterprises, will be responsible for the major task of creating the future of the McLouth site, a task nearly as mammoth as the plant itself, considering the environmental challenges of the property.

Executive Evans said he is excited about the future of the site, and proud of how it all came together through cooperation.

"This deal, I've gotta tell you is one that didn't have a lot of outside counsel bills and a number of other additional costs. The government agencies got together. Mayor Stack. Trenton City Council, Eric Sabree the Wayne County Treasurer, EPA, we worked together. Everyone was motivated to bring this to a successful conclusion," Evans said. "Those who think government can't really perform under pressure, this is a prime example of how governments can work together to get stuff done."

McLouth dedicated its site in 1954, 20 years after the company's founding, then added expansions to the plant in 1958, 1960, 1964, and 1967. Among other firsts, McLouth was the first plant in North America to produce steel using what was known as the basic oxygen process. Also known as Linz-Donawitz steelmaking, the basic oxygen process is a method in which carbon-rich molten pig iron is made into steel by blowing oxygen through the molten pig iron, creating low-carbon steel.

The ceremony commemorated a huge win for Trenton and Wayne County. This new chapter includes a development agreement with Crown Enterprises that promises $20 million of minimum investment, local hiring for the people to do the work of tearing down McLouth and the ensuing redevelopment, and $250,000 of philanthropy to be spent in the City of Trenton.

In a ceremony reflecting the collaboration it took to get the deal done, Trenton's City Administrator Jim Wagner presented memorial plaques to many of the key contributors.