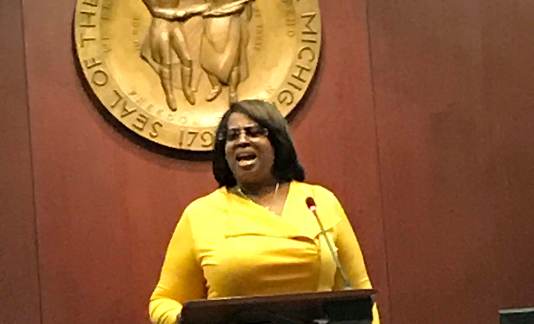 WHEREAS, each year beginning February 1, an entire month of events is planned throughout the United States honoring the rich history and contributions of African Americans; and

WHEREAS, the theme for Black History Month 2018 is "African Americans in Times of War," recognizing brave men and women who served their countries in the armed forces, especially those who made the ultimate sacrifice while defending the American ideals of freedom and democracy; and

WHEREAS, Black History Month is an important time to acknowledge and celebrate the contributions of African Americans in the nation's history and recognize that the ethnic and racial diversity of the United States enriches and strengthens the nation overall; and

WHEREAS, the continued celebration of the month provides an opportunity for all people in the United States to better understand D. Carter G. Woodson's launch of Negro History Week in 1926, proclaiming that Negro History Week should always occur in the second week of February which falls between the birthdays of Frederick Douglass and Abraham Lincoln; and

WHEREAS, since 1976, every American president has proclaimed February as Black History Month, and today other countries such as Canada and the United Kingdom also devote an entire month to honoring and celebrating black history; and

WHEREAS, by reliving and remembering history, it is possible to create awareness of the struggles and challenges that African Americans overcame in this country and that this proven perseverance will serve as an inspiration for all races in America. Every race is connected to the rich history of this nation and by celebrating Black History Month everyone can be included in a tradition of acknowledgement, inclusion and community engagement;

Now, therefore, be it

RESOLVED, that the Wayne County Commission on this 22nd day of February 2018 recognizes February as Black History Month and the integral part of our nation's tradition in which we promote positive examples of poignant historical events, exemplary leaders and taking measures towards societal change; and, be it further

RESOLVED, that the Wayne County Commission acknowledges and commends organizations nationwide for the events held and tributes displayed in remembering the deeply meaningful contributions of African Americans and gaining a greater understanding of national and world history.